We invite you to please share your remembrances of Rich.
Please send your emails or video stories to: daleallenllc@yahoo.com and I will post them here.

2.  It's Nov., 1978 -- Harold brings the national & regional promo group to San Francisco for meetings at a Gavin convention.  A couple of guys had never been to San Fran and were concerned -- this is a week after Harvey Milk and their mayor were shot.  After dinner one night, Rich who had lived there and knew the city inside out (don't forget it was he who discovered Santana) took a couple of cab fulls to Enrico's in North Beach.  T'was a Friday night and this was a cool open sidewalk cafe that was hopping in the North Beach district.  Richie assured everyone how safe this area was.  As he had us 'captured' telling one of his great stories (with his back to the the street), a crazy girl runs up to him, takes off her shoe and hits him hard on his back.  Everyone is freaked!  Rich grabs one of the cane chairs and like a lion tamer in a circus and forces the psycho to back off and run away!  For the rest of the weekend, every time any of us saw Rich in our fancy hotel lobby, we'd take off a shoe and tap him on the shoulder!  Other guests probably wondered -- what a strange thing to do!

3.  It's Dec., 1975 -- weekend meetings in gorgeous Aspen, CO.  Sunday is departure day -- flight to Denver and onward to our home cities.  All but Rich and Charlie Minor show up at the tiny Aspen Airport.  It's fogged in and  overcast -- all flights delayed perhaps for the day.  FYI, Rich and Charlie were each with a local 'ski hottie' who knew that no flight will take off with that sky.  Thus, they're no shows.  Our beloved president, Gil, decides to charter a full size bus for the 5+ hour ride to Denver's Stapleton Airport.  Those of us on board aged greatly during that scary, horrific ride!  Like a movie scene...the bus swayed and skidded on icy narrow mountain roads...we all thought we'd go over a cliff any time.  Moss was not on that one...however, Harold, Gil, Fead and other top VP's were; along with several of us 'junior execs.'  Someone said that if this bus did crash, that would leave Rich and Charlie alone to 'run the company!  Gil was gracious enough to invite a couple of outsiders to join us --- one guy looked like the 'straightest suit & tie nerd ever  -- even he partook smoking the many joints that Steve Dunn 'happened to have.'  And about halfway there, we stopped at a roadside general store on this 2 lane road...Gil literally bought them out --emptied all the shelves with snacks, sandwiches and drinks (including beer).   Now we were 'gased and scared'  all at once!
And, when we finally pulled up to the airport in Denver...who was there to greet us -- Rich & Charlie --skies had cleared after a couple of hours and they took the 30 minute flight after all!  There were no cell phones then and they had no idea what had happened to us.
These two 'romeos' had made the right move after all!
The rest of us lived through this 'wayward bus' ride!

4.  One time in the 1980's Rich & I went to a club near his apartment in 'the village' in NYC to see Ronnie Spector perform.  The place is packed -- no seating -- only standing room with wall to wall people.  We say hello to Tommy Mottola (who Toto knows).  Good thing.  Before long, Rich gets into a shoving match with some older, heavyset guy -- I get next to him not knowing what -- and then up steps, Tommy Mottola with actor Mickey Rourke.  They manage to separate Toto and me from this guy and his group just before fists and bottles flew!  So glad -- we were outnumbered.  Then Tommy introduces us to Mickey whereby Rich mentions his hit film, "The Pope of Greenwich Village" which takes place on Carmine Street.  Rich tells Mickey "I live on Carmine Street."  Mickey then tells us..."yeah...you almost died here on Varick Street --- that guy you had the shoving match with is a 'made man' and those with him are his 'mob' buddies all packing heat!"   So, I can honestly say that actor Mickey Rourke saved our asses that night!

5.  I supposedly almost got the 1974 George Harrison tour busted in Wash., D.C.  After the concert in the Watergate Hotel hospitality suite (where we would introduce George to the media), Tom Scott asks if Rich and I had any more of the grass we all smoked the previous night.  Since I can't roll a joint well, we both went to get some 'wild weed.'   When we returned, I was trying to give joints to Tom and George not noticing that Jack Ford, the President's son, was there along with a few guys in suits with earpieces.  It was Rich who realized the scene and kept yours truly from taking out the 'doobies'   Once again, Rich to the rescue!

There are so many more to be told. Just not the time or space at this point.  Perhaps someday, someway.
Again, Rich was a super friend and such a good guy. He leaves his son, Kevin, also Dale, Joan and hundreds
who knew and adored him.  He was the ultimate 'mixer.'  One of the true greats has left us!   Rest well my old pal -- you will be so missed by multitudes!"
ALL ACCESS allaccess.com
Veteran Promotion Exec Rich Totoian Passes On At 85
by Joel Denver
June 27, 2022 at 1:20 AM (PT)
ALL ACCESS is very saddened to report the passing of longtime music promotion exec RICH TOTOIAN at age 85 earlier this month (6/17) peacefully in bed at Jewish Senior Services in Bridgeport.  RICH had been in the hospital for some tests before his passing and was cremated per his wishes. A celebration of life event is being planned for October 16th from 2-5pm at Park City Music Hall in Bridgeport by his son KEVIN and family, with whom he’d lived with at the time of his death.
Longtime friend RON FARBER told ALL ACCESS, “I am still shaken and shocked over the recent passing of my dear friend of almost 50 years, RICH TOTOIAN. We had a close and bonding friendship that transcended our mutual time at A&M and HME RECORDS; his later work with BUD PRAGER's ESP MANAGEMENT and EPIC; mine with PENTHOUSE, as an indie and elsewhere. We shared so many successes, road trips, laughs and outrageous 'adventures.'  He was what one would have called 'a great record man' ... and even a far better person!"
FARBER added, “RICH was a true legend as a promotion guru as well as a raconteur extraordinaire. RICH had also held national exec positions with COLUMBIA, A&M, WINDFALL MUSIC, and more.  RICH was a very gifted storyteller who could recreate his endless past experiences using his remarkable talent for voices, dialects, and facial expressions.
“He had a thousand personal stories about everyone he encountered, from his pal KEITH MOON of THE WHO to JANIS JOPLIN, MILES DAVIS, ANDY WILLIAMS, PETER FRAMPTON, JACK BRUCE of CREAM, GEORGE HARRISON, LESLIE WEST of MOUNTAIN and scores more!  In addition, it was RICH TOTOIAN who discovered SANTANA getting COLUMBIA RECORDS to sign him!  RICHARD was loved by his peers and will be remembered for his warmth, compassion, loyalty, and kindness.”
Tommy Nast
A wonderful read and great tribute Ron.  Toto was warm, funny and such a great person and I am sure he was laughing knowing the great stories Ron Farber shared.

David Fleischman
Great tribute, Ron Farber. I guarantee you he's looking down with that smile he ALWAYS had on his face.

Peter Mollica
Ron...
It's late Sunday night ... just opened my email and sorry to see the news of "Toto."  He was a delight and his memory will always make me smile.

Martin Kirkup
Ron,
it’s great to hear from you, after all these years, especially with your fond remembrance of Rich Totoian, and your great road stories which capture so much of his personality.
When I joined A&M New York in April, 1975, you, and Rich, and Pete Mollica were so kind and welcoming to me, even though I knew nothing of the record business and all I had going was a passion for music.
I think that was when Supertramp were about to start their “Crime of the Century” Tour, and I remember asking naively if A&M always gave away most of the concert tickets? but that was the start of building a huge career, just like we did in different ways for so many others.
We had so many hilarious nights with Rich, listening to his amazing but true tales. We shall not see his like again.
I trust that all is well with you, and send my best wishes.
Cheers, Martin

"I can watch this Peter Frampton video OVER and OVER..You played an Important Role in PETERS’ CAREER, at a time in the RECORD BUSINESS when ARTIST DEVELOPMENT was CRITICAL to a REAL CAREER..I don’t think the Album would of had the same IMPACT,if it was a SINGLE ALBUM..It brought a SMILE to my face to hear how YOU and KEVIN and DALE were Treated that night at the recent Show in Conn..Love this Story and the Great Editing and cut ins Tie the whole thing Together..MORE MORE MORE...I look forward to MOUNTAIN and FOREIGNER..Love your STORIES..."  Louis Levin😀📀💕👍
"Richie, this is just amazing. Dee Anthony used to sit Peter in my office when he would meet with Mel Fuhrmsn. We would talk for hours. Such a nice guy. Saw his show when he played Atlanta. Wish I could have said hello. Thanks for posting this."
Louis Lewow
"Watched Dale's Frampton video.  Really enjoy your story telling (as always).  The inserted edits with Frampton, of Kevin and the cat at the dinner table added visual interest.  I enjoyed Dale's voice in background as she led you back into the story, with a quick glimpse of her.  So great that you're documenting this music history (your story) together!"
10/29/19 E.
"It had to have been about 1973-74. I was doing the overnight shift on WQIV-FM, the Quadrophonic Progressive Rock station in N.Y.C. I was playing "The WInd" by Circus Maximus. The hotline rings. I pick it up and it was you! You said that he couldn't remember the last time that someone played that on the radio. At that point, I knew I had made it to the big time: getting a call from Rich Totoian!"  Bob Marrone
"Hey Schmeg, just finished watching the Frampton video… It was fabulous, and so are you my dear friend… Oh the stories we could tell… Thanks for sharing…"   Michael Abramson 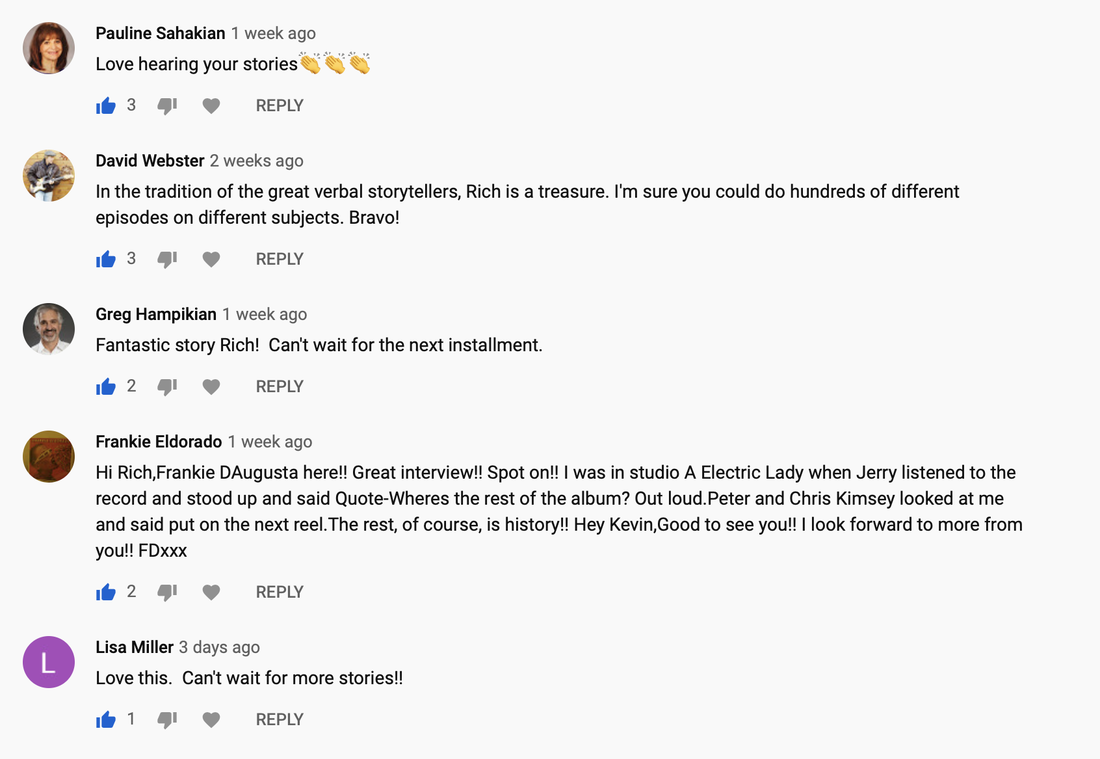 "I loved watching this From Salesman to Promotion Man video Rich, and finding out about your early start in the record business. Coincidentally, I have also eaten at the Blue Fox when I was only 19 years old. I remember it was the fanciest and most elegant restaurant I had ever been to up to that time. As a matter of fact, it still rates up there as one of the best I have ever been to."  Sherry Jones Levy
"I absolutely loved this!!" Allene Schmid Warner 👏👏👏👏